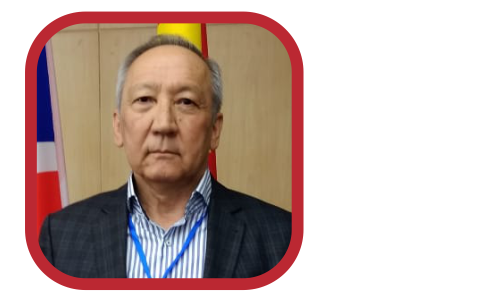 Mr. Bulekbayev was born and raised in Almaty. He graduated from the Alma-Ata, Tashkent and Novosibirsk Transport Institute. He currently serves as the Executive Director of the Association of Scientific Research and Design Organizations (ANIP). He has been recognized as an Honorary Railroad Worker, and an Honorary Member of the Chartered Institute of Logistics and Transport CILT (Great Britain).  Currently he serves as the General Director of the Research Institute of Transport and Communications.

Mr. Bulekbayev has extensive experience with government and business entities. He started his professional career in the Alma-Ata Railway and then he worked in the Ministry of Transport of the Republic of Kazakhstan and for several transport industry institutions. Mr. Bulekbayev has more than 20 years’ experience in business, including senior-level positions in “Economtransconsulting” LLP, “ASIK” JSC, “EvrotranzitCargo” LLP, “AsstrA” JSC (Switzerland), and the JICA Representative office (Japan). In addition to his work as the General Director of the Research Institute of Transport and Communications, Mr. Bulekbayev is the Chairman of the Central Asia Transport and Logistics Partnership since June 2017. He also works as an expert consultant in the development of professional standards for “Kazlogistics” UTW.

Mr. Berik Bulekbayev has been repeatedly awarded with state awards, certificates and numerous letters of recognition from “KTZh” National company, the Ministry of Transport, USAID, GIZ, and ANEC for his many years of success in the transport industry. These include “Adal enbek ushin” – 2009, 2010, 2011, Badge of Honor “100 Years of Kazakh Railway” and Badge of Honor “50 Years of Almaty Railway.”